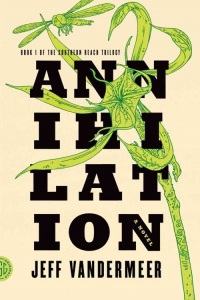 Jeff VanderMeer ventures on to strange ground in this enigmatic story that looks at what happens when nature (with a bit of help from what may be an alien intelligence) starts making a comeback. In a story that recalls Roadside Picnic a team of unnamed scientists is sent to explore Area X, a land from which few travellers have ever returned. There they find a pair of totemic structures — tunnel and tower — overgrown by greenery, including walls that are covered in a creepy living text of graffiti. It seems like something allegorical is going on, as individualism, rationalism and civilization crumble before a resurgent, holistic, spiritualized nature that cannot be understood by our useless instruments, broken methodologies, and selfish motivations.