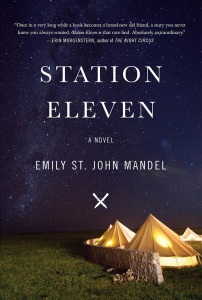 In Station Eleven a global pandemic known as the Georgian Flu kills off 99% of the world’s population, turning out the lights, shutting down the Internet, bringing horses back for transportation, and turning civilization into an “archipelago of small towns.” With travel and communication dialed back to medieval times, it seems that in the future we’ll all be living local, whether we want to or not.

The story begins with a performance of King Lear at Toronto’s Elgin Theatre and then skips forward and back in time, following the lives of a group of characters whose paths crossed just before the Event. Chief among these is Kirsten, who was a child actor in the Elgin Lear and twenty years later is a knife-throwing leading lady in a wandering troupe of Shakespeareans known as the Traveling Symphony. In times of collapse, the public likes to go back to the classics.

It’s a nice conceit, pitting the impulse to preserve the best of our old culture against a somewhat predictable villain in a future teetering between utopian and dystopian outcomes. Reminiscent of the work of David Mitchell, Station Eleven is a speculative adventure that holds out hope for a soft landing in troubled times.