The Just City
By Jo Walton 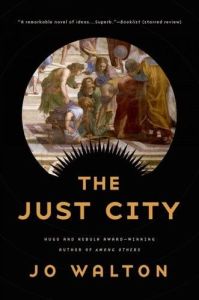 The first utopia, or imaginary ideal community, was Plato’s Republic. Plato didn’t mean it as a realistic policy proposal but rather as a thought experiment, and in Jo Walton’s latest novel it’s taken up in much the same spirit.

Or rather it’s taken up by the goddess Athene. The grey-eyed daughter of Zeus is so taken by Plato’s story that she decides to put it into practice, bringing together a who’s who of the greatest minds in the Western intellectual tradition (past, present, and future), and setting them the task of building the “just city” on a slated-for-destruction Aegean island full of children she had picked up on local slave markets.

Plato didn’t think his program for utopia was realistic, and few involved in Athene’s version think it’s going to work either. Explaining why things fall apart and what it is of Plato’s vision that is worth saving, or still aspiring to, is the burden of Walton’s tale. The results are a bit unsurprising – freedom and equality are affirmed as the core values of any just society – but Walton brings together an interesting cast, headlined by Socrates himself, for some political and philosophical debates as relevant as ever in our own time.