The Causal Angel
By Hannu Rajaniemi 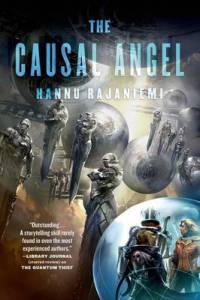 There’s an optimistic branch of SF that sees a post-human, secular rapture in our future. Technology has advanced so far that it has annihilated not just time and space but most of what we think of as the laws of physics. “Reality” has become just another plastic construct, to be manipulated at will. Identity, memory, and consciousness are compressed into so much information, and then transported around the universe at the speed of light.

The Causal Angel, by Finnish author Hannu Rajaniemi, is a novel very much in this tradition. It’s the final part of the Jean de Flambeur trilogy, and continues the adventures of that master thief and gentleman rogue as he tries to navigate various bizarre conspiracies involving the weaving and re-weaving of the cosmos.

If you haven’t read the first two parts of the trilogy then you’ll be lost, and even if you have you’ll find yourself in deep water. Rajaniemi’s universe is a dense and cluttered one, whether we’re traveling through deep space or just sitting in a virtual-reality drawing room. Characters also have a disorienting habit of jumping between avatars, and the language takes a while to get used to.

If you can find your feet, however, you can expect to be taken on a ride that doesn’t let up for a second.