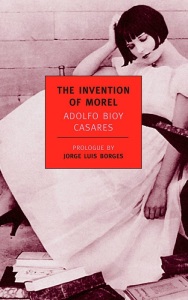 I don’t know to what extent La invención de Morel would have been considered SF in 1940, the year it was first published, but if we can think of a book as becoming science fiction then it certainly qualifies.

The scientist Morel is more our contemporary than Dr. Moreau, that other island visionary-despot Casares apparently named him after. Technology has gone a long way toward realizing the novel’s imagining of the fantastic, and I think any twenty-first century reader will quickly recognize the holograms and the island as a paradise that foreshadows the rapture of the nerds, with consciousness uploaded to the cloud (or tides). It’s taken a while, but at last we’ve come within sight of the realization of our spiritual yearning to shuffle off our mortal coil and consummate our virtual destiny. We aren’t there yet, but we’ve almost managed to invent Morel.