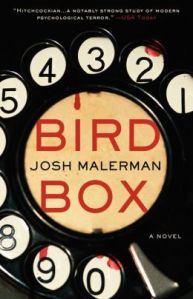 Josh Malerman’s debut effort Bird Box is an SF-horror novel that’s less cinematic in its effects than the genre usually runs. This is because the source of the terror is unseen.

The set-up has it that most of the world’s population has died after an outbreak of something known only (and rather unimaginatively) as “the Problem.” We don’t know what the Problem is, but we do know it’s out there, and if you look at it you go crazy and kill yourself (as well as anyone else who happens to be around). The only way to avoid being affected is to barricade yourself in your house, nail blankets over the windows, and never go outside without a blindfold.

As you can imagine, this makes life tough for young mom Malorie, who, five years after the outbreak, has to leave the safety of her shelter, taking two young children (named Boy and Girl) with her on a perilous river journey.

The Problem sets an almost Oulipan challenge for Malerman. Action sequences have to play out in terms of sounds, smells, and sense of touch. But it all succeeds remarkably well, effectively generating suspense through a number of spooky scenes while continually teasing us with the possibility of a big reveal.