The Bees
By Laline Paull 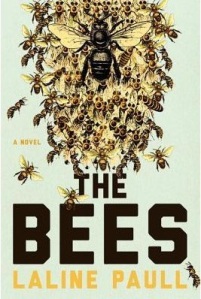 Laline Paull’s The Bees sets itself a challenge: telling a story from a very restricted, almost alien point of view. The heroine is a bee, her life directed mainly by complex pheromone traffic signals.

Fables have been with us since the dawn of narrative, and bees have always been a popular subject, usually praised for their industriousness and sociability — sort of like ants with class. But Laline Paull gives us a darker, dystopic bee story, emphasizing the rigid hierarchies and structures of control characterizing the original hive mind.

The novel follows the rise of Flora 717, a lowly sanitation worker who runs afoul of the hive’s prime directives to “accept, obey, and serve” when she starts thinking for herself. What follows is an allegory that works on several levels, but mainly it’s a thrilling fantasy adventure that has the hive fighting for survival from various enemies known as “the Myriad” (wasps, spiders, crows, humans) while the broody Flora makes plans for what will happen when the Queen is dead.