This Insubstantial Pageant
By Kate Story 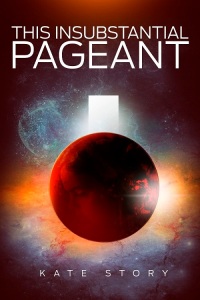 The infinite adaptability of Shakespeare has been proven again and again over the past 400 years, with his plays being set in every different time and place imaginable. Why not The Tempest in space then? Indeed, it had already been done, or at least suggested, as long ago as 1956’s Forbidden Planet.

With This Insubstantial Pageant self-described Shakespeare geek Kate Story sticks much closer to Shakespeare’s Tempest than did Forbidden Planet, while at the same time re-imagining the play in an exotic, funny, and very sexy way. SF fans and Shakespeare buffs should be equally delighted.

The plot and even much of the dialogue will be familiar. A brilliant scientist, Prosperina, is stranded on the planet Lalande-21185b after her biotech corporation is stolen by her brother. However, with the help of some high-tech magic she is able to create a new home for herself and her daughter Milana, along with some lab-grown companions like the “mobile vegetative sentient lifeform” Kaleeban.

When a shipwreck brings her brother and the rest of the cast to Lalande Prosperina’s revenge is set in motion. And everything seems to be following her (and Shakespeare’s) script . . . at least until the natives start getting restless.