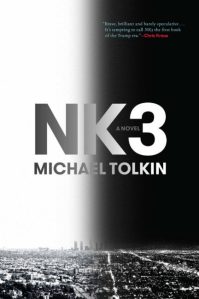 The title NK3 comes from the name given to a virus originating in North Korea that has the effect of erasing people’s memories to varying degrees. In a burnt-over Los Angeles a new social hierarchy has developed in the wake of the plague: the Verified (those retaining some vestigial sense of their past) live inside a giant security Fence, while Drifters and Shamblers wander outside.

Neo-LA is like a giant Comic-Con event, full of weirdly-costumed characters with funny names. The plot matches up well, being complex without any single focus, skipping among dozens of different players who aren’t even sure who they are much less what they are doing. It’s even difficult to pin down a consistent tone, as the story is by turns mystical, comic, philosophical, and political.

The resulting chaos may frustrate readers looking for something more conventional, but for those preferring abrupt, discontinuous, cinematic forms of narrative (Tolkin is best known for his work in film), NK3 will be just the ticket.