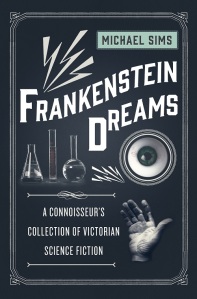 The publication of Mary Shelley’s Frankenstein in 1818 is usually regarded as when science fiction began, with the genre then taking another hundred years to arrive at its present form. In this anthology of stories and novel excerpts from the nineteenth century, editor Michael Sims tracks the process of this shaping, collecting some of the earliest explorations of what would become staple themes like time travel, robotics, and space exploration.

Calling this “Victorian” science fiction is slightly misleading, as most of the stories, some of which are quite obscure, are American. It’s mainly the excerpts from longer works that come from familiar European authors like Mary Shelley, Jules Verne, Robert Louis Stevenson, and H. G. Wells.

In any event, the major difference between SF then and now is perhaps not so much our greater knowledge of the universe – we no longer believe in Lunarians living on the moon, for example, or cities on Venus – as it is the evolution in style. It’s the flavour of the writing here, so distinct from our own, that really makes this a collection for the connoisseur.