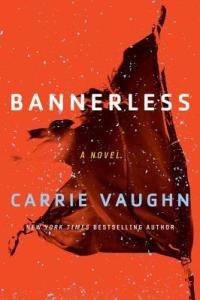 Civilization has fallen apart, again. There were epidemics, an economic crisis, rising oceans and giant storms. It’s been remembered as the Fall. In its aftermath a series of communes are strung out along the Coast Road with only scraps of technology keeping our heads above a new Dark Age. Travel on the Coast Road is by solar car, horse and wagon, or foot. Women are implanted with birth control patches to keep population levels sustainable. A permit given to a household to have a child is called a banner.

This is the world of Carrie Vaughn’s Bannerless, an SF novel crossbred with elements of mystery and Western. New investigator Enid travels to the Coast Road town of Pasadan to look into a suspicious death, playing the role both of police detective and sheriff sent to bring justice to the frontier.

The way the narrative alternates between past and present is a little awkward, but Vaughn shakes the formula elements of her plot up enough to make Bannerless an engaging read right up until the final reveal and journey home.