The Last Iota
By Robert Kroese 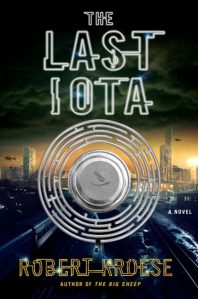 The Last Iota is the action-packed sequel to Robert Kroese’s hit neo-noir mystery The Big Sheep, returning us to a mid-twenty-first-century, post-Collapse Los Angeles and the team of brainy private investigator Erasmus Keane and his brawny partner Blake Fowler.

The iota of the title is a type of virtual currency, much like today’s bitcoins. When the iota was launched there were a handful of physical iota coins produced and now for some reason they are in high demand, with people literally dying to get their hands on them. Finding the last iota, and figuring out why it’s so important, will force Keane and Fowler to navigate an urban war zone while trying to untangle a complex web of high-level financial chicanery and blackmail.