The Passengers
By John Marrs 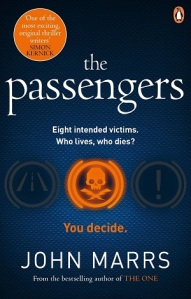 In 1997 a Canadian film named Cube launched what would become a popular sub-genre in horror fantasy. The set-up goes like this: a group of strangers awake to find themselves in a futuristic death trap. While being monitored by an outside agency they must find a way to escape or die. As the game progresses secrets are revealed, though these often don’t explain the bigger mystery of why all this is happening.

The Passengers is another take on this formula, which is perhaps best known to movie audiences from the Saw film franchise. In a near-future England a Hacker has taken control of a bunch of self-driving cars, locking their passengers inside and speeding them toward a common doom. He wants to play a game, revealing a bit about each passenger to a live streaming audience that will get to vote on who lives or dies.

As with all such stories it’s a combination morality tale and game show, which makes for compelling reading. John Marrs delivers with all the twists that you’d expect and even a couple you probably won’t in a tale of accelerated unnatural selection.