The Last Astronaut
By David Wellington 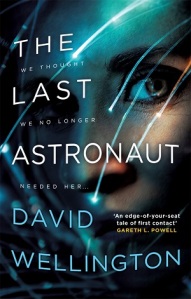 It says a lot for the richness and durability of classic science fiction tropes that a novel like The Last Astronaut is so thrilling.

In the year 2054 a large object that shows signs of being directed by an alien intelligence enters our solar system. An undermanned NASA has to bring Sally Jansen, whose previous mission to Mars ended in disaster twenty years earlier, out of retirement to lead the first-contact team.

They’ll need Sally’s experience when they get to 2I (the name of the alien structure) and things start to go nightmarishly wrong. As the astronauts go spelunking through the vast, cave-like interior of 2I they have to deal with a rapidly changing and threatening environment, even as the team itself comes undone.

David Wellington presents The Last Astronaut as a novelization of an oral history and it’s an approach that works surprisingly well. First-contact stories always involve elements of mystery and suspense as the heroes try to come to grips with new forms of intelligent life that may put the entire Earth at risk, or be no threat at all. The Last Astronaut will keep you guessing, and turning pages, until the very end.