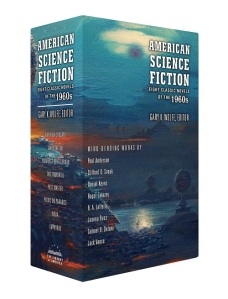 This boxed-set two-volume collection of classic American SF novels from the 1960s, part of the distinguished Library of America series, is a must for fans of the period.

Editor Gary K. Wolfe’s previous collection of classic SF novels from the 1950s provided a window into the early days of the genre, when particular tropes were just becoming established. In the ‘60s we see variations and experiments beginning to be played on many of these same themes.

What makes a classic? The eight titles included aren’t the most famous SF novels of the ’60s. Flowers for Algernon is probably the best known after being made into the movie Charly. You’d be forgiven for not knowing that they also made a (very bad) movie out of The High Crusade. Space was a consideration for not including some longer titles, as was whether the author has been published by the Library of America in other volumes (hence no Vonnegut, Dick, or Le Guin here).

It works out for the best though, as these are all great novels that many readers, especially younger ones, may not be familiar with.