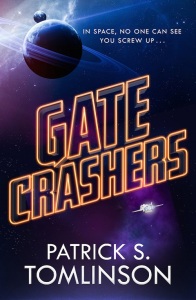 As Nietzsche might have said, we should be aware that when we stare out into the immensity of space, space may be staring back.

Gate Crashers begins with a distant-exploration vessel discovering a mysterious alien device, setting off alarm bells back on Earth. This first contact, however, turns out to have a different meaning for the rest of the inhabited universe. One that consulting a copy of First Contact for Dummies isn’t going to help with.

The device is actually a signaling buoy alerting those who dropped it off that humanity has crossed a threshold in its development and broken out of its local game preserve. The buoy’s discovery then sets in motion a chaotic series of events that have to be somehow navigated by the usual loveable cast of heroes (including one gorilla).

Patrick Tomlinson obviously enjoyed jamming a whole season’s worth of Star Trek material into a single comic space opera, and it adds up to a lot of fun for the reader too. The only problem for humanity is that the alien lizard people have been watching Star Trek too.