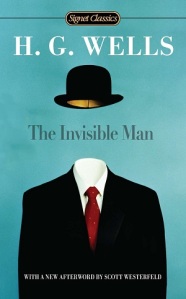 Because he’s a popular author and one who worked in the field of genre fiction it’s easy to overlook just how good a writer H. G. Wells was.

The premise of an invisible man wasn’t new to Wells, or the destabilizing effect such a power would have on one’s psychology. That goes back to Plato’s telling of the myth of the Ring of Gyges. But the story is told vigorously here, in tight journalistic style (sticking to eyewitness reports, for example), and is given a perfect structure, from beginning mysteriously in the middle of things and expanding from the tavern at Iping until all of England is in a state of national alert: “Griffin contra mundum — with a vengeance!” Wells was an author of ideas, but it’s his narrative chops that make The Invisible Man a classic.