The Million
By Karl Schroeder 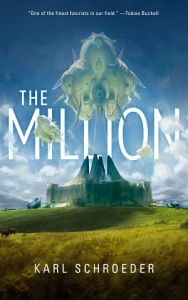 The Million is a short novel set in Toronto author Karl Schroeder’s Lockstep universe. The guiding premise of Lockstep is that overpopulation has been dealt with by putting most of the world’s population to sleep, leaving a neo-feudal aristocracy of wealthy families, attended by countless service bots, to take care of things in the long gaps between awakenings.

A series of unfortunate events gets young Gavin Penn-of-Chaffee a new identity and a trip to a Venetian boot camp for population-police recruits (they’re called “auditors”). The academy is a place with a whiff of Hogwarts about it, and Gavin’s adventures among the auditors have the same kind of feel as he and his new friends learn about how their world operates while passing various tests and getting out of some dangerous scrapes. And more is to come, with things bound to get even more complicated as the sleepers awake.