The Doors of Eden
By Adrian Tchaikovsky 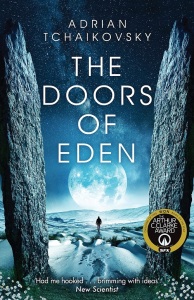 There’s a lot going on in The Doors of Eden. The story begins with a pair of paranormal investigators, Lee and Mal, being split up when Mal is sucked into another dimension. Years later, the missing Mal will reappear with some disturbing news. It seems there are lot of different dimensions that are starting to crowd together in a collapsing of the multiverse. There may not be time to save our own timeline from a messy extinction event, even as a villainous CEO sees the resulting chaos as an opportunity.

A lot of the different elements, like the dimensional portal-jumping, are nothing new (Narnia even get referenced several times), but their juggling by Tchaikovsky is marvelous, making The Doors of Eden a real page-turner of an adventure. Just as we jump between different realties up we also switch between characters, including one James Bond-wannabe MI5 agent who is just trying to keep up with what’s going on.

Particularly well handled is the introduction of different evolutionary histories explaining the exotic (and lethal) species and civilizations whose timelines are converging. These other-Earth “aliens” are a fascinating bunch, and they toss a whole suit of wild cards into a plot that’s full of crazy fun.

6 thoughts on “The Doors of Eden”