Drug of Choice
By Michael Crichton (writing as John Lange) 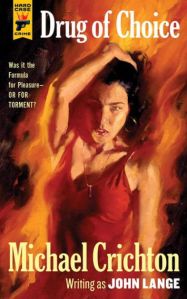 In my notes on Philip K. Dick’s A Maze of Death I said that being so far ahead of the curve in his positing of a virtual reality that replaces the real world entirely is part of what gave Dick the status of a prophet, given how much it predates later interest in this theme in movies, not to mention Baudrillard’s concept of the simulacrum.

In fairness I should extend the same prophetic status to Michael Crichton, whose Drug of Choice came out the same year as A Maze of Death (1970) and which could be seen as another early precursor, not to mention a dry run for better known examples of the augmented-reality resort that would appear in Crichton’s own later work from Westworld to Jurassic Park. Only this time instead of having to build robots or breed dinosaurs all you have to do is take a pill.

Crichton was his generation’s H. G. Wells: a well-read man of art and science with an unerring popular taste directed at questions of the day. “We’re bringing science down to the masses, making it agreeable, understandable. We’re educating people.” So says Dr. Blood as he describes his plans for using designer psychopharmaceuticals to create a can’t-miss pop band. Was his next project going to be making hit movies? Television shows? Someone was getting ideas.

5 thoughts on “Drug of Choice”