The Food of the Gods
By H. G. Wells 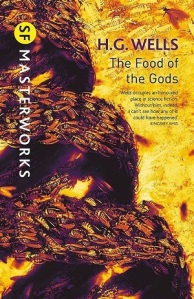 The full title continues with “and How It Came to Earth.” I’m not sure why, since the Food is a man-made lab product and not some alien growth hormone. In any event, the novel has never been as popular as Wells’ early SF classics, for what I think are obvious reasons. After a rollicking start involving giant chickens, wasps, and rats – all that would be kept in place in the disastrous Bert Gordon film adaptation – it turns into a mushy sort of political fantasy (there’s even a captive princess) when “the children of the Food” rise up against the resentful masses of little people.

It’s not revolution so much as evolution when the boomfood generation comes of age, leading to the beginning of a world made new by the Food and its “great dawn of wider meaning.” We may think here of The Midwich Cuckoos and what that novel had to say about the incompatibility of different species. The world isn’t big enough for the little and the big to share even if they wanted to, and they clearly don’t. So there’s blood in the offing.

But there’s something mystical in all of this too as Growth becomes a kind of divine historical principle: “the law of the spirit for evermore. To grow according to the will of God!” It’s Victorian progress as theology. At the time quite radical, but in retrospect the last gasp of such optimism, at least couched in these terms.

4 thoughts on “The Food of the Gods”