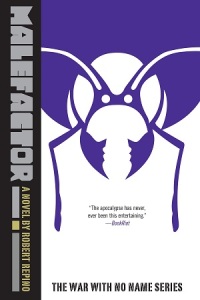 Malefactor is the final volume in Robert Repino’s whimsical War With No Name trilogy, with the titular war being one between humans and animals that have been anthropomorphized by the late Ant Queen.

The cat Mort(e) is again one of the main characters, along with the dogs D’Arc and Falkirk. Together they are trying to defend the holy city of Hosanna, ruled by a joint government of humans and animals, from the posthumous plots of the Ant Queen, now being carried out by a pack of wolves.

This is epic stuff, though it’s presented throughout on a very personal level, with the weird interspecies pairings seeming somehow natural in spite of everything. Odd but effective world building in the grand fantasy manner.