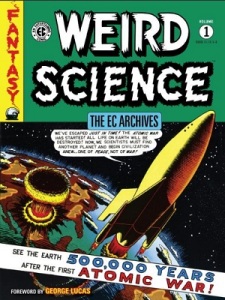 I don’t think Weird Science was the most popular EC Comics title, though it shares the same sense of schlocky fun and pulp formula as Tales from the Crypt and The Vault of Horror and in many ways holds up better than either of those series. The editors also insisted on at least some degree of genre purity: “Our policy will always be to give you REAL science-fiction! No ‘cops and robbers’ or ‘cowboys and Indians’ in spaceships!” Those exclamation marks were very much the house style.

The remit here was for weird science fiction, and many of the stories foreshadow what audiences were soon to see on Rod Serling’s The Twilight Zone, with experiments gone awry and endings that come with an ironic snap. One man shrinks away into ever more microscopic worlds mise en abyme style, while another grows into a colossus. The artwork is bubblegum, but above that of many comics of the day, while the writing, along with the aforementioned exclamation marks, goes well with the action. An early version of the omnivorous Blob, for example, “slither[s] forward . . . crashing . . . gurgling . . . sucking . . . gulping . . . a mass of nauseous, ugly, ill-smelling filth . . .”

Dark Horse has done a great job reproducing these classic EC series from the early 1950s in handsome Archive volumes done up in a large format with eye-popping colour. It’s great looking stuff that was ahead of its time in 1950 and still belies its age today.