Paris in the Twentieth Century
By Jules Verne 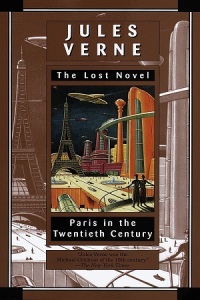 It’s a commonplace that science fiction shouldn’t be judged on how accurately it predicts the future, which is something it only occasionally attempts anyway. Reading Paris in the Twentieth Century we can gasp at the ubiquitous horseless carriages in the streets and elevated trains running on magnets, the use of “photographic telegraphy” to send faxes worldwide instantly and the execution of criminals by electricity, all of which was prophetic in 1863, but then wince at the way global capitalism has made war obsolete. But this ledger of hits and misses is mostly window dressing.

What lasts is the evocation of the spirit of an age still recognizably our own, beginning with an account of the decline of the Humanities and the more general transformation of education into an industry serving market demands. In 1860 sixteen-year-old Michel Dufrénoy has graduated from the state school system with a proficiency in Latin and a Romantic yearning for the “ultimate limits of ethereal poetry,” all of which makes him totally unsuited for the modern workplace. He wants “to be an artist in an age when art is dead!” Good luck with that.

Verne’s editor hated it, and it’s not hard to see why. There’s not much of a story and the mood is a lot bleaker than that of the Extraordinary Voyages. The manuscript was only discovered in 1989 by Verne’s great-grandson, locked in a safe and all but forgotten. This seems apt. A civilization dedicated to progress is one without a past: its great books abandoned (“everyone was getting rid of them!”) and their authors’ names all but erased from their graves. The nineteenth century had plenty of doubts about where it was going. Our own fears take the form of a more immediate and systemic collapse. Is that progress? 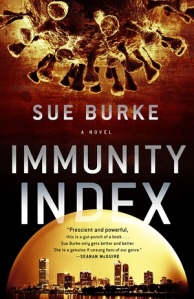 Being timely can be both a good and a bad thing. Immunity Index, which is about a pandemic, and social breakdown more generally, is the sort of book that will hit close to home now. But a U.S. president who is a right-wing carnival-barker may already feel like yesterday’s news.

Sue Burke’s latest is set in a near-future America that is basically a police state divided between the have-a-lots and the have-nothings. There is, however, a resistance movement that is about to erupt, while at the same time a pandemic is breaking out. Three young women who are “dupes” (or clones) get swept up in the action, and the story is told from their points of view, as well as that of the scientist who created them. Plus there is an adorable woolly mammoth named Irene.

It’s ground that’s been gone over a lot lately, but Burke is a fine writer with strong narrative chops and the early pandemic chapters in particular effectively capture the feelings of confusion and fear we’ve been living with for the past year. 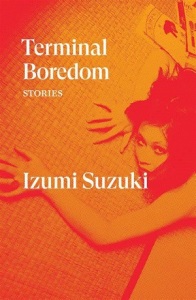 Genres can get stuck in a rut, in need of a jolt to get them going again. In twenty-first century SF, for example, there have probably been too many political dystopias and climate apocalypses. The end of the world used to be more interesting.

The stories in Terminal Boredom provide an injection of something new, which is all the more surprising given that the author, Izumi Suzuki, committed suicide in 1986. What her writing connects with, however, is a sense of jaded alienation that is still with us, brought about not so much by our machines as by meaningless, routinized social relations that turn our lives into reruns of old TV shows. Solace can only be found in technology and drugs.

The best of Suzuki’s stories recall the fierce existential probings of Philip K. Dick. “That Old Seaside Club” even plays like a clever and sad reimagining of Dick’s famous story “We Can Remember It for You Wholesale.” All of which should make the book feel terribly retro, but instead it’s one of the freshest collections I’ve read in years. One warning: it doesn’t put its best foot forward, instead leading with what I think is the weakest story in the bunch. Don’t let it turn you off. 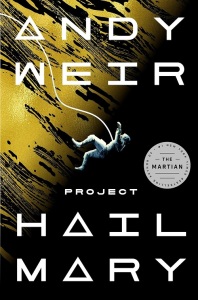 Andy Weir had a breakout with his 2011 novel The Martian, an initially self-published hit that went on to become a bestseller and a blockbuster movie. While his next book, Artemis, was well-received it didn’t enjoy the same success with fans, who may have been primed to expect more of what made The Martian so popular.

If that is what they wanted, they get it in double doses with Project Hail Mary.

Once again we have a jocular nerd as hero, stuck on his own in deep space. This time he’s Ryland Grace, a rebel scientist who left the world of academia to teach junior high school but who is pulled from the classroom and sent on a mission to save the Earth from a recently-discovered space algae dubbed the Astrophage that is literally eating our sun.

The fact that Grace is a science teacher, and begins the book having lost his memory, lets Weir feed us the story in a way that’s easy to follow as we learn along with him, solving various problems and overcoming obstacles as though they’re levels on a video game. It’s a bit artificial, as is the cutting back and forth between the events Grace remembers from his life on Earth and what’s happening now on board the spaceship (which he shares with an alien he calls Rocky), but once you get started it’s a hard book to put down. And even educational. 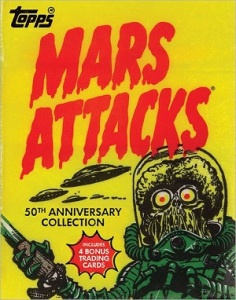 A book classified here under “Stories” because I don’t have another category for it. I suppose you could think of it as a kind of graphic novel, being a series of 55 illustrated trading cards (including index) that tell a through narrative of a Martian attack on Earth.

The cards had limited distribution in 1962 because of backlash at all the sex and violence, but they’ve gone on to become collector’s items, their cult status boosted further by the (terrible) 1996 Tim Burton movie. The story is pretty weak, being basically just a serial account of alien invasion in the tradition of The War of the Worlds. But as a compendium of pop SF at the time it’s hard to beat, and this book is a wonderful tribute, with excellent reproductions of the original series of cards as well as a generous selection of bonus material and commentary. A great addition to any SF-lover’s shelf.

In the Quick
By Kate Hope Day 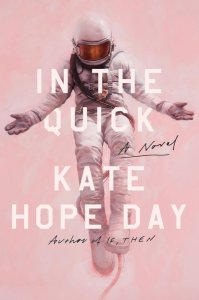 Even in the future only overachievers are going to make it to the stars, and June, the heroine of In the Quick, fits the bill. June’s uncle invents a new type of fuel cell allowing for more efficient space travel, but when June is only 12 years old an exploration vessel powered by these cells mysteriously disappears. This sets the precocious girl on her way, and gives In the Quick most of its plot.

June is henceforth on a mission to discover what happened to the missing spaceship, and perhaps to rescue its crew, who she believes are still alive. She is joined by her uncle’s protégé James, another scientist. Both June and James are similar personalities, making them poor relationship material, but they are thrown together in a way that at least holds the promise of their making new discoveries, if not developing an atypical romance.

June, by design, isn’t a lively, human character, and the part of the novel covering her education and training runs a bit slow, but this is still a novel in the great SF tradition of high-stakes problem-solving through personal grit, intelligence, and technology. 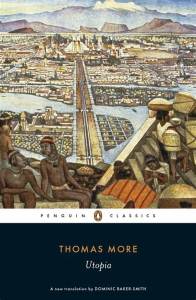 I think Mary Shelley’s Frankenstein deserves its status as the first science fiction novel. But that doesn’t mean there weren’t a lot of precursors.

The utopian theme is a big one in SF, with its journey to another world or society that turns into a commentary on our own. Indeed, this is something fundamental to the vision of most speculative/futuristic works. When writing about the future (or the past, in a historical novel), we’re always writing about today, projecting our present concerns and anxieties.

And so Thomas More’s fanciful tale of an island republic is an essay on the “state of England,” the only question being how ironically it’s meant to be read. I think the gold chamber pots and communal dining halls are just window dressing on a passionate critique of the moral and political failures of the English ruling class. A critique that resonates just as much today as it did five hundred years ago. 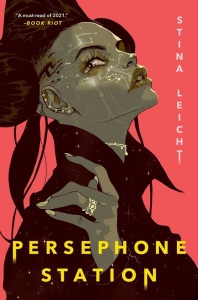 Persephone Station is a slam-bang action adventure set on a planet that constitutes the wild west of the United Republic of Worlds. Unlike most such tales of space cowboys though, all the main characters, even the artificial ones, are female, and mostly lesbian or bisexual.

Angel (short for Angel of Death) is a tough-as-nails ex-space marine now in the protection and assassination business. Along with her elite team of bad girls she’s drawn into a mysterious and dangerous plot involving criminal syndicates, evil megacorporations, and the government, all of which are interconnected on different levels. Also in the mix are a race of long-lived aliens (or not-aliens, since they’re a species indigenous to Persephone Station) and some powerful and quickly-evolving AIs. 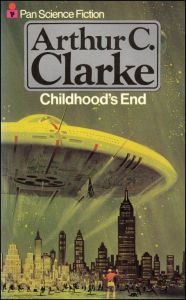 Arthur C. Clarke was a man of science, but at the time of writing Childhood’s End he’d been much taken with various paranormal investigations. The result is this curious blend of science and speculative mysticism that has humankind achieving its destiny by developing into something strange and new.

You can’t call it evolution since there is no adaptation through natural selection to a changing environment. Instead, the New Man is born of the Last Man like a butterfly bursting forth spontaneously from its cocoon, an event that has apparently been our fate since the dawn of time. And what an ambiguous destiny it is! Gone are all those ingenious, lovely things like creativity, imagination, and emotion, adventure, science, art, and religion. Gone is the individual. All hail group consciousness and absorption into the collective Overmind! If this is the way the world ends, count me as disappointed.

Erich von Däniken must have been taking notes, as the demonic appearance of the Overlords is credited specifically to our species’ memory “not of the past, but of the future” (the original German title of Chariots of the Gods? was Erinnerungen an die Zukunft, or Memories of the Future). In a 2000 Foreword Clarke takes responsibility for contributing to the subsequent fin-de-siècle flood of “mind-rotting bilge about UFOs, psychic powers, astrology, pyramid energies, channeling – you name it.” But does that mean he disowned Childhood’s End? Not a bit. It remained one of his favourite books, and was “a work of fiction, for heaven’s sake!”