Ted Chiang is not a prolific author – Exhalation is only his second story collection – but he has a big reputation, recently bolstered by having written the story that the Denis Villeneuve movie Arrival was based on.

Chiang’s stories operate a bit like speculative essays, though they’re a lot more fun than that sounds. Few authors working today are as good at exploring our intimate connection to technology. In “The Lifecycle of Software Objects” he gives us what may be the best look yet at what it means to fall in love with an artificial intelligence, with all of the feelings of responsibility and dependency that love entails. In “The Truth of Fact, the Truth of Feeling” two watershed moments are juxtaposed in order to show how the tools we use for recording daily experience change us. This is how technology works: we shape it and then it shapes us in turn. We get inside each other.

It’s a short step in a Chiang story from the everyday to the bizarre: a time-travel portal or a fidget-like toy may equally teach us profound truths about ourselves. Truths we may conclude we’re better off not knowing.

A People’s Future of the United States
Ed. by Victor LaValle and John Joseph Adams 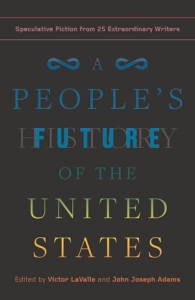 For several years now SF has had a good claim to being the most socially aware or “woke” genre of fiction. This is most likely because SF is by its nature more political and speculative in its imaginings, with its various utopias and dystopias representing critiques of our current ways of doing things. In the 2018 volume of The Best American Science Fiction and Fantasy there was even a call by editor N. K. Jemisin for resistance to the “fascist” Trump regime by using SF stories to speak truth to power.

A People’s Future of the United States, which borrows its title from Howard Zinn’s lefty landmark People’s History of the United States, is an anthology very much in the same mode. The editors called for stories that would imagine a more hopeful, liberal, just future America. As you might expect, the results can sometimes get preachy with their calls for greater tolerance and diversity, and appeals for an end to oppression. It is not all virtue signalling, however, and there a lot of really good stories here that go in unexpected directions and achieve their ends with subtlety.

As an author and activist Cory Doctorow’s fiction often takes up the same political subject matter as his advocacy and opinion pieces. In recent years the two have been drawing ever closer together, to the point where the four novellas in his latest collection, Radicalized, might almost be thought of as dramatic essays.

The stories are drawn from hot-button issues in today’s headlines and then given an SF spin: cybersurveillance runs amok in smart homes, racism and law enforcement get challenged in an age of superheroes, the rationing of health care gives rise to dark-web terrorism, and social inequality implodes at the end of the world.

Informing all of this is Doctorow’s libertarian but socially progressive optimism, with heroic hackers and freedom fighters looking to create a more just society. And while he can be preachy, he is dealing with timely issues that affect us all.

The Very Best of the Best: 35 Years of the Year’s Best Science Fiction
Ed. by Gardner Dozois

For 35 years super-editor Gardner Dozois, who died last year, helmed the prestigious Year’s Best Science Fiction anthologies. The Very Best of the Best offers up some highlights from his tenure, but the subtitle is flat-out wrong as the book only includes stories that go back to 2002. There were two previous Best of the Best volumes that included stories published from 1983 to 2002, making this book the third such selection.

With that important caveat out of the way one can recommend The Very Best of the Best wholeheartedly. As you would expect, the line-up of names is like a who’s who of contemporary SF, and as always with Dozois the selection is expertly assembled, offering up a wide range of traditional tropes and themes being spun in all kinds of imaginative new ways. Not all of it will be to everyone’s liking, but for everyone there is a lot to like. You really can’t go wrong adding such a volume to your collection.

The Nebula Awards debuted in 1966, with Frank Herbert’s Dune taking the prize for best novel, and since their inception they’ve been accompanied by a companion volume showcasing the nominees.

This year’s edition, the fifty-first, is drawn from the 2015 Nebulas and comes to us edited and introduced by Canadian author Julie Czerneda. It contains all of the nominees for Best Short Story as well as the winners of the Best Novella, Best Novelette, Best Short Poem and Best Long Poem prizes. In addition there are excerpts from all of the books nominated for Best Novel, and brief intros by the authors. While not as big a book as most Year’s Best anthologies (of which there are many), its sampling of different forms does make it something a little different.

There has been controversy in recent years over the underrepresentation of women in SF awards, so it’s worth noting that in 2015 all of the major Nebula Awards, for poetry and fiction, were won by women, from Alyssa Wong for best short story to Naomi Novik for best novel. Did the voters get it right? The Showcase lets you be the judge.

For over thirty years Gardner Dozois’s Year’s Best Science Fiction anthology has set a standard for excellence, but the 2017 edition stands out as something special, and would be my pick for the best in the series of the last ten years.

The stories are, as always, diverse and entertaining, but they also come with extra layers of significance, like pop allegories with bite. A sequel to John Carpenter’s movie The Thing, for example, turns into a new way of looking at the AIDS crisis in the ‘80s. Alien invasion and the supplanting of our own species is welcomed in “Touring with the Alien” and “Fifty Shades of Grays” (which has humanity seduced into committing a sort of auto-erotic extinction event).

The stories look in all directions: full of nods and winks to the past, and dreaming of the future while staying deeply rooted in the here and now. Christopher Marlowe is raised from the dead as an A.I. A cyborg Shane stalks the Saskatchewan prairie. A man digs a grave for his father and builds a tower to the stars.

In sum it’s a book to enjoy and wonder at, but also one to make you think.

Patently Absurd marks a joyful return to the city of Retropolis and the future that never was, the location of Bradley Schenck’s previous novel Slaves of the Switchboard of Doom. Specifically, the six linked stories collected here deal with the adventures of a couple of employees of the Retropolis Registry of Patents, an office that has the unenviable task of trying to keep a lid on some of the more dangerous ideas coming out of the city’s Experimental Research District.

This means it’s up to Ben Bowman and his robot assistant Violet to deal with breakaway floating labs, an eruption of mole people, outbreaks of blue slime, time machines, doorways to other dimensions, and, that curse of all bureaucracy, corrupt and incompetent management as they attempt to save Retropolis from a spirit of innovation gone mad. Throw in a generous helping of Schenck’s own delightful illustrations and what you have is a high-spirited genre romp that fans won’t want to miss.

Alex on SF
Create a free website or blog at WordPress.com.