Lost in Time
By A. G. Riddle 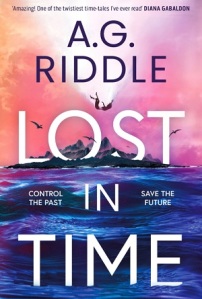 Even for veteran SF readers used to creative new ways of dealing with crime – like convicts having their memories wiped, or transported to penal colonies on other planets – the idea of criminals being sent back in time hundreds of millions of years so that they can fight it out with dinosaurs in an alternative Earth timeline may seem a bit of a stretch.

Nevertheless, that’s the premise here as Sam Anderson, one of the scientists who developed the patented Absolom time-travel technology, is convicted of the murder of a colleague he’d been dating and then jettisoned to dinosaur-land. As he struggles to survive Triassic Park, his daughter Adeline tries to figure out who framed him back here on Earth Prime, while also working with the other Absolom scientists to develop a machine that can bring her dad back.

Lost in Time is obviously high-concept Hollywood fluff, but if you’re looking for a bubble-gum page-turner with lots of silly action, cliff-hangers, and plot twists it’s hard to beat a time-travel murder mystery with dinosaurs.

The Voyage of the Space Beagle
By E. A. van Vogt

A “fix-up” of four short stories that was published in the annis mirabilis of SF fix-ups (1950, which also saw the publication of Isaac Asimov’s I, Robot and Ray Bradbury’s The Martian Chronicles), The Voyage of the Space Beagle has two claims to historical fame. The first story, which has the cat-like Coeurl killing and eating the crew after it’s rescued from its dying planet, is considered by many to have kicked off the golden age of science fiction in 1939. And the third story, which has an evil red demon called an Ixtl laying its eggs, or guuls, inside the guts of living crewmen until they hatch and eat their way out, may have inspired Alien (the creators of Alien said it hadn’t, but Van Vogt sued the studio, and the action was later settled out of court).

The Space Beagle itself is clearly a precursor to Star Trek’s Enterprise, only without any women in miniskirts. Or any women at all. It’s a ship on a mission to explore strange new worlds and seek out new life and new civilizations. What they meet up with, as with the Coeurl and Ixtl, is usually some threat to their survival. Meanwhile, politics on board play out in a nasty way, with the hero of the story being the hotshot “Nexialist” Grosvenor, whose field is a combination of all the arts and sciences. One new science being an early form of Hari Seldon’s psychohistory, which is applied in highly improbable ways.

Grosvenor is also a figure who, despite all his resourcefulness, is unappealing today, being so full of himself and possessing a dubious sense of personal ethics. The writing is also casual and clumsy, unable to keep up with the fire of Van Vogt’s imagination. At times he even seems impatient with the whole idea of narrative. So despite being a landmark work rooted in the pulps, I didn’t find the book to be much fun. Nonetheless, its influence was dramatic, and it did much to shape the later history of SF along some interesting new lines. 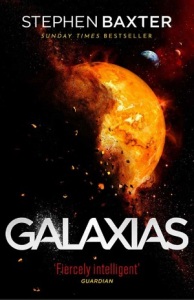 By the year 2057 the Earth has already been through a lot. The effects of climate change have even forced the relocation of the British parliament to Newcastle and the American government to Alaska. But then the Blink occurs – a name given to the sudden disappearance of the Sun. This truly does seem like the end of things. But then, just as quickly as the Sun left, it comes back.

Obviously some very powerful forces are at work, which the global brain trusts take to calling Galaxias. It seems the removal of the Sun is a message that’s been sent to us, though the meaning of that message is obscure and the nature of Earth’s response much debated by the scientific bureaucracies in China and the West.

This makes Stephen Baxter’s new novel a bit talky in places, but the focus on a trio of friends and the backdrop of speculative “hard” SF on a grand scale combine to make Galaxias an engaging enough cosmic mystery story, with an ending that opens up in a big way. 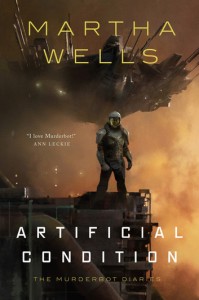 Artificial Condition is a sequel to All Systems Red, signaling that this will be a series of books — The Murderbot Diaries — starring the security cyborg known as Murderbot. The action picks up pretty much where All Systems Red left off, with Murderbot heading to a mining planet in order to discover how his programming got scrambled, which had led to him running amok.

Like All Systems Red this is a very short book, and it has even less story to tell. Most of the action takes place in Murderbot’s head, in the form of data transfers and closed-circuit conversations he has with his new buddy, a space transport’s AI that he bonds with while binge-watching serial dramas. As with a lot of second chapters in SF serials there’s a sense of marking time, of bringing the story forward enough to introduce some new plot line but not really progressing the action. In other words, Wells is setting the hook. As I say, this is often the way that serials play but it means that as a standalone novel Artificial Condition doesn’t have that much to offer.

The Ugly Truth
By Ira Nayman

The Ugly Truth marks the finale of Toronto author Ira Nayman’s Multiverse Refugees trilogy, set within his Transdimensional Authority universe. Some knowledge of what’s already happened may be helpful, but given the chaotic insanity of Nayman’s work (think lots of bold interrobangs) it’s probably not essential.

The mouth of madness is opened after the evacuation to Earth of a bunch of blue-skinned vaudevillians (dressed in exquisite three-piece suits) whose universe is about to implode. These immigrants, who are constantly performing stand-up and slapstick for their God the Audi Enz, have various adventures that are related in a medley of forms, including news stories, pop songs, and diary entries. The odd couple of Rodney Pendleton and Daveen Rasmalai are back, while among the new characters are a superhero named Mistah Charisma (spawned by the Heronator machine) and a refugee running for parliament.

Nayman again delivers manic farce with more groaning puns and bad jokes than you can stuff in a multidimensional suitcase and winds the trilogy up nicely with a wholesome message for all of us . . . and a wink.

I don’t think Weird Science was the most popular EC Comics title, though it shares the same sense of schlocky fun and pulp formula as Tales from the Crypt and The Vault of Horror and in many ways holds up better than either of those series. The editors also insisted on at least some degree of genre purity: “Our policy will always be to give you REAL science-fiction! No ‘cops and robbers’ or ‘cowboys and Indians’ in spaceships!” Those exclamation marks were very much the house style.

The remit here was for weird science fiction, and many of the stories foreshadow what audiences were soon to see on Rod Serling’s The Twilight Zone, with experiments gone awry and endings that come with an ironic snap. One man shrinks away into ever more microscopic worlds mise en abyme style, while another grows into a colossus. The artwork is bubblegum, but above that of many comics of the day, while the writing, along with the aforementioned exclamation marks, goes well with the action. An early version of the omnivorous Blob, for example, “slither[s] forward . . . crashing . . . gurgling . . . sucking . . . gulping . . . a mass of nauseous, ugly, ill-smelling filth . . .”

Dark Horse has done a great job reproducing these classic EC series from the early 1950s in handsome Archive volumes done up in a large format with eye-popping colour. It’s great looking stuff that was ahead of its time in 1950 and still belies its age today.

Does this tale of psychological horror count as science fiction? Well, Dr. Jekyll’s experiments in “transcendental medicine” are at least as scientific as those of Dr. Frankenstein and his search for the electrical elixir of life. Both novels also present interesting types of the mad scientist figure who would go on to become such a staple and then a cliché of the genre. They aren’t noble researchers daring to go where no one has gone before in order to benefit mankind and accidentally unleashing demons along the way, but rather obsessive loners who know what they’re doing is wrong. Dr. Jekyll may be a decent fellow in some ways, but he has a double nature and wants to unleash his dark side. His conclusion is justifiably pessimistic: “Other will follow, others will outstrip me on the same lines.”

The Men
By Sandra Newman 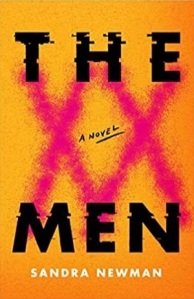 In her acknowledgments at the end of The Men Sandra Newman gives thanks to a number of earlier feminist SF writers who had imagined all-female societies, mentioning the names of Joanna Russ, Alice Sheldon, and Sherri Tepper. The list could have been extended quite a bit further though, to the Herland of Charlotte Perkins Gilman, Begum Rokeya’s Ladyland, or even medieval and classical models. It is an enduring fantasy.

The story here has it that all the males in the world (defined as bearers of a Y chromosome) instantly disappear one day. This leaves Jane Pearson to scramble about a manless California, reflecting on various social justice matters and whether this gender-biased version of the Rapture is a good thing.

Though there are many feminist forebears, the real presiding spirit is Stephen King, who has created many such apocalyptic landscapes. The fate of the men is also King-like, as they appear to have been uploaded to a kind of digital purgatory where they are tormented by demons. What it all adds up to though is left a bit fuzzy.

A timely parable, and that not always in a good way, The Men has already generated its share of controversy. One suspects that readers are likely to either find it too political or not enough.

Store of the Worlds
By Robert Sheckley

The introduction to this collection of pieces by Robert Sheckley calls them “perfect stories of their type.” The type in this case being SF, mainly published in Galaxy Magazine in the 1950s. In other words, pure pulp. But they are indeed perfect examples of that type. They’re great pulp fiction.

What this means is that they showcase clever ideas, often playing with odd points of view or tricks of narrative perspective, along with tidy dramatic plots resolved by way of artful, not-quite-surprising twists. A satiric note is sounded throughout, which only gets darker and more prophetic in the later efforts (with Galaxy left behind for Playboy, a pessimistic turn that says a lot about where faith in American culture was heading).

The 1950s can be seen as a transition period in SF, moving from the Golden Age to the New Wave, and Sheckley has a foot in both worlds. He turns seamlessly from stories about first contact to imagining the perversities of the entertainment-industrial complex and the trippiness of Philip K. Dick. And as with the best speculative fiction of any age, the results still speak directly to us today.