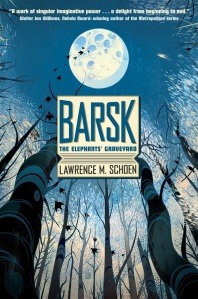 Barsk is a great example of SF world building, one of those novels that builds an entire alternative civilization – geography, biology, language, religion, political system, history – from the ground up.

The planet Barsk is a watery world populated by elephants, who in turn occupy the lowest level in a hierarchy of anthropomorphized animal species who together make up an interplanetary federation. What the “Fants” on Barsk have that others want is a drug called koph that facilitates communication with the dead by reassembling their “nefshons” (subatomic particles of personality). Channeling these nefshons, memory as collective subconscious takes form and speaks.

There’s a lot going on in Barsk, what with the amount of background material and the large cast of characters, including otters, bears and cheetahs. But Schoen brings it all together expertly and the result is a great yarn set in a vibrantly original new world.